Flowers (or blossoms) are the sexual reproductive structures of angiosperms. The biological function of a flower is to facilitate reproduction and produce seeds to propagate – through their dispersal – the next generation.

Plant sexual reproduction usually depends on the pollination of those flowers through different agents and vectors while asexual reproduction occurs without their use, with plants producing no seeds or spores to ensure their survival (like in vegetative reproduction). Flowers have evolved to develop conspicuous morphological and behavioral characteristics to attract insects and other animals to serve their pollination needs. Some flowers use other mechanisms to facilitate the dispersal of their pollen through other vectors such as wind and water. 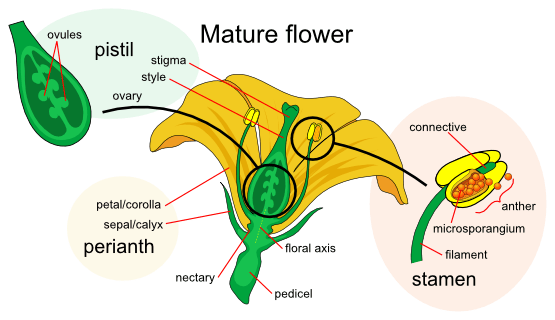 Collectively, the calyx and corolla form the perianth. The calyx consists of leaf-like structures at the base of the flower that protect it during its development. They are individually referred to as sepals. The corolla is composed of several units called petals, which are typically thin, soft, and colored to attract insects and animals in facilitating the process of pollination. In monocots, the calyx and corolla are indistinguishable; the whorls of the perianth or perigone are called tepals.

The androcium corresponds to the set of male reproductive organs (stamens) while the gynoecium encompasses the female reproductive organs of the flower (carpels). The androecium consists of stamens that possesses a stalk called a filament, topped by an anther where microspores – which will give rise to pollen grains (male gametophytes) – are produced by meiosis (a cell division that results in four daughter cells) and then dispersed. The gynoecium consist of one or several carpels. The carpel or multiple fused carpels form an ovary that produces ovules internally. Ovules are megasporangia and they in turn produce megaspores by meiosis which develop into female gametophytes, giving rise to egg cells. Alternatively, the term pistil is used to describe the female reproductive structure presents in the innermost whorl (ovary, style, and stigma). The style is a pillar-like stalk through which pollen tubes grow from pollen grains in order to reach the ovary. The stigma – usually found at the tip of the style – is the sticky, adhesive portion of the carpel(s) that receives pollen.

The ovary, which may contain one or multiple ovules, may be located above other flower parts (referred as superior) such as in legumes or below those (inferior) such as in cucurbits. A flower with the former arrangement is described as hypogynous while a flower having the latter is termed as epigynous. In some instances, the ovary is embedded or surrounded by the receptacle. Such flowers are called perigynous or half-epigynous (also known as half-superior, subinferior, or partially inferior).

Each of the two aforementioned main growth patterns is further divided into other types of inflorescences. In indeterminate simple inflorescences, the main kind of racemose inflorescence is the raceme, a cluster of pedicellate flowers (having short floral stalks) located along the axis. Spikes (raceme with flowers that do not have a pedicel), corymbs (flat-topped or convex inflorescence), umbels (raceme with a short axis and multiple floral pedicels of equal length emerging from a common point), spadixes (spike of flowers densely arranged around it, enclosed or accompanied by a highly specialized bract called a spathe), capitula (very contracted raceme in which the single sessile flowers are borne on an enlarged stem), catkins (scaly, generally drooping spike or raceme) are other types of raceme that can be observed.

In determinate simple inflorescences, the main kind of cymose inflorescence is the cyme, which is further divided into four types: uniparous or monochasial (main axis ending in a flower and producing only one lateral branch at a time that ends in a flower), biparous or dichasial (peduncle bearing a terminal flower and stops growing), multiparous or polychasial (main axis culminating in a flower, and at the same time producing again a number of lateral flowers around), and cymose capitulum (peduncle is reduced or condensed to a circular disc, bearing sessile or sub-sessile flowers). Monochasial cymes are further divided: helicoid or bostryx (lateral axes developing successively on the same side, forming a sort of helix), scorpioid (lateral branches developing on alternate sides, forming a zigzag), and sympodial (successive axes being first curved or zigzagging then becoming straight due to rapid growth, forming a central or pseudoaxis).

Flowers that possess both male and female reproductive organs are called “perfect flowers” (or androgynous/hermaphrodites). Flowers that lack any of the four parts previously mentioned are known as “incomplete” and are divided into two types: staminate flowers, containing only an androecium; and carpellate/pistillate flowers, having only a gynoecium. Plants that carry both male and female flowers are called monoecious (i.e., cucumber) while species with male and female flowers present on separate plants are known as dioecious (i.e., spinach). Depending on the species and varieties, the same plant may bear both hermaphrodite and male (andromonoecious) or female flowers (gynomonoecious). Some hybrid varieties are bred to be gynoecious, bearing predominantly female flowers, with the aim of improving productivity earlier in the season while preventing the plants from wasting energy producing male flowers.